AppleEvent sandboxing – which was announced in the WWDC 2018 session "Your Apps and the Future of macOS Security" – affects every app that sends AppleEvents to other apps.

Back in June, I wrote that the new Apple Event sandboxing in macOS Mojave lacks essential APIs and highlighted problems with the implementation.

Since then, Apple has made a couple of changes to AppleEvent sandboxing.

Usage descriptions provide context around an app's request for a particular permission. Typically, it is shown as part of authorization prompts that ask for permission to access sensitive areas like photos, camera, contacts or calenders.

Since macOS Mojave beta 6, a usage description for AppleEvents can (and often must) now be provided for the NSAppleEventsUsageDescription key in an app's Info.plist. Daniel Jalkut has an excellent blog post showing you how.

Determining and prompting for user consent

Two new APIs now enable apps to time when the user is asked for consent and to determine the current authorization status.

macOS Mojave beta 7 introduced AEDeterminePermissionToAutomateTarget, a new API that allows apps to determine whether they're authorized to send an AppleEvent to another app:

The new function expects a reference to the target app to be provided as AEAddressDesc.

Permissions can be determined for a specific AEEventClass/AEEventID combination. Alternatively, passing typeWildCard for both checks if every AppleEvent can be sent to the target app. This distinction is important since certain AppleEvents don't require authorization from the user.

Finally, apps can choose to just check their current authorization status - or prompt the user to obtain permission as needed.

Here's a simple example that determines if the calling app currently has permission to send AppleEvents to iTunes - and prompts if not:

Possible return values of AEDeterminePermissionToAutomateTarget include:

Also new in macOS Mojave beta 7 is kAEDoNotPromptForUserConsent, a flag that can be added to the AESendMode that's passed to AESend().

If the AppleEvent sent that way would require user consent, the user is not prompted for consent. Instead AESend() will return errAEEventWouldRequireUserConsent.

Next to AppleEvents, it also allows providing an array of Identity Dictionaries for each of these Services: AddressBook, Calendar, Reminders, Photos, Camera, Microphone, Accessibility, PostEvent, SystemPolicyAllFiles, SystemPolicySysAdminFiles. That should cover pretty much all of the new sandboxing features in Mojave.

For AppleEvents, detailed information like the code requirements of the sender and the target app is required in the Identity Dictionary. Here's an example excerpt of a payload that would allow Remote Buddy to send AppleEvents to iTunes:

With no way to whitelist apps and no way to ask the user for authorization without the targeted apps running, building a configuration profile for users and saving them a ton of clicks and frustration is definitely a tempting idea. I've also had it.

However, profiles with this payload fail to install as they "must originate from a user approved MDM server": 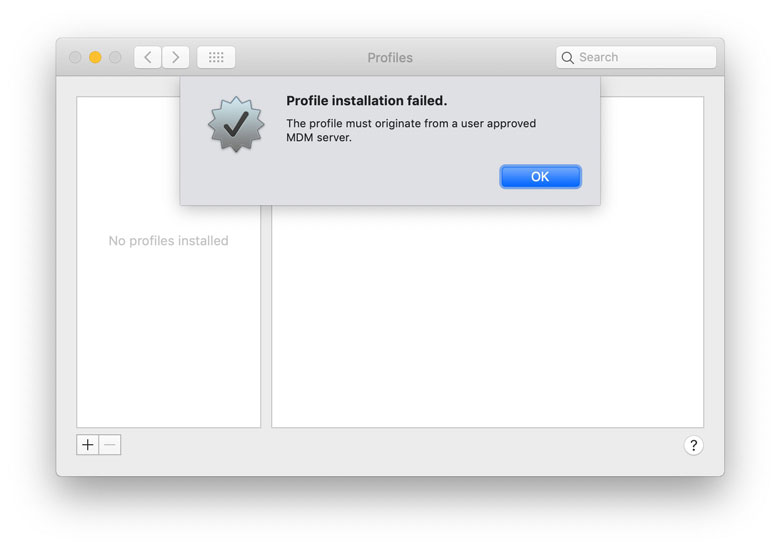 In the current beta, the title is now a lot longer:

"Some.app" wants access to control "Other.app". Allowing control will provide access to documents and data in "Other.app", and to perform actions within that app.

The additional sentence provides valuable context to inform the decision of people who aren't as familiar with macOS security, but it makes the title way too long.

Below is an image that shows this and other issues I found with the current authorization prompt, as well as suggestions on how it could be improved. 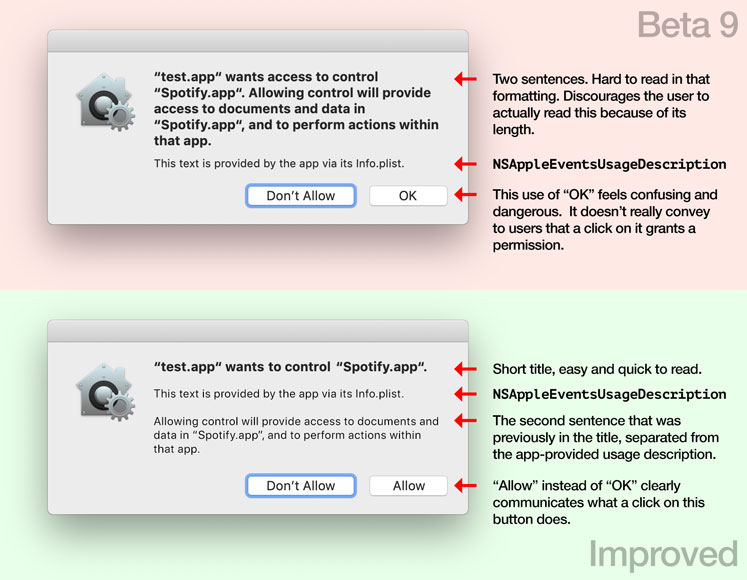 I've filed a bug on this (Radar, Open Radar).

Apple provides tccutil - a utility to manage the privacy database. To reset AppleEvent authorizations for all apps, use:

Going by the man page, it should also be possible to reset the AppleEvent authorizations for a single app by appending its bundle identifier like this:

However, that command currently fails with an error, stating there is no such bundle identifier.

Apple's willingness to act on the issues of the original AppleEvent sandboxing implementation in a matter of weeks deserves respect and my heartfelt thanks goes out to everyone at Apple who made that possible.

The new APIs solve the most pressing issues.

For many apps, however, it remains impossible to provide a user experience on par with that of previous macOS versions. Still missing for that:

AppleEvents are a powerful and important IPC mechanism, differentiator and defining feature of the Mac. They're at the heart of AppleScript, Mac automation, utilities, accessibility tools and pro workflows.

The introduction of sandboxing will have a lasting impact on how AppleEvents work and how they can be used by apps. It has the potential to change the character of the technology as well as the Mac platform as a whole.

Summary of the current status

As of beta 9 - possibly the last beta before Mojave is likely released to the public in roughly a month - here's where things stand:

Control over the timing of authorization prompts is now possible, but still constrained.

No support for whitelisting apps means users of utilities that target many apps will not be able to escape a Vista-esque "bombardment" with authorization prompts that keep interrupting their work. It's not hard to see that affected apps will get one-star reviews, loose users and sales - through no fault of their own.

No support for whitelisting apps also means there's no fallback for legacy apps that - for any reason - don't work well, or at all, with AppleEvent sandboxing.

The lack of documentation around AppleEvent sandboxing means developers either aren't aware of the changes - or can't know in time how they can prepare their apps for them.

AppleEvent sandboxing, as of Mojave beta 9, is not in a good shape. The addition of new APIs in beta 7 telegraphed that Apple is still working on it. But it's unclear what changes are still in the pipeline - and whether Apple can make enough progress before Mojave's public release.

I hope Apple can at least squeeze in support for whitelisting before public release as it's really a catch-all for issues with the new mechanism.

I feel, though, that the most responsible way for Apple to handle this situation would follow the playbooks for Group FaceTime and 32 Bit deprecation: postpone the feature until it has matured - and make it available to developers behind a feature toggle until then.

Ultimately, I'd like Apple to reconsider its approach when making changes like these to the foundation of macOS: introduce it at WWDC, but put it behind a feature toggle. Leverage the developer community. Enter into a dialogue to learn about unintended effects of the change, missing or bad APIs. Iterate. Make changes where needed. Provide comprehensive documentation well in advance. Then, at WWDC the year after, remove the feature toggle and make the change permanent.

Giving foundational changes like these a full year to mature – and developers to adapt their apps to them – would lead to all-around better results, less stress, anxiety and frustration for developers, a higher degree of stability and a better experience for users.

I'd like to thank Andreas Hegenberg, Daniel Alm and Jens Miltner for sharing their discoveries and insights with me. This blog post would be far less comprehensive without them.

Thanks to Paulo Andrade and Shane Stanley for independently sharing this hint with me.

AEDeterminePermissionToAutomateTarget can't be used to "silently" determine authorization status – not even for running apps
Sep 2, 2018

As of 10.14 beta 9, you need to pass true for askUserIfNeeded to get errAEEventNotPermitted, which can bring up the prompt.

Passing false, errAEEventWouldRequireUserConsent is returned even if the user was previously prompted and declined permission.

In consequence, even for running applications, AEDeterminePermissionToAutomateTarget can't be used to silently determine the current status. To be usable for that, it would need to return errAEEventNotPermitted in case consent is required and the user has already been prompted about it and denied. This feels like a bug. Paulo Andrade has filed a radar about it.

Thanks to Paulo Andrade for pointing this out to me.